I would like to acknowledge the support of a Northern Writers’ Award in 2016 from New Writing North, supported by The Literary Consultancy, Northumbria University and Arts Council England.

If you’ve not yet read Gore Vidal’s Julian – stop whatever it is you’re doing, board a plane, hire a car, jump on an e-scooter to your nearest bookshop; hell, catch a wave, hang ten and surf to the usual suspects online, buy it and read it before breakfast.  It is among the finest historical fictions available to humanity.

Refresher:  Vidal fictionalises the life of the Emperor Julian (AD 331 – 363), remembered as ‘the Apostate’, a nephew of Constantine the Great who attempted to stem the tide of Christianisation and revive polytheistic pagan culture.

The narrative is bookended, years after Julian’s death, by a series of exchanges between two of his friends who argue over and agitate for the publication of the late emperor’s account of his own life.  The fictionalised memoir drives an eye-witness narrative of a period of history that is enthralling and the consequences of which still condition the world we live in today.  Like Julian, Vidal has no high opinion of Christianity (there’s a very good joke aimed at assumptions about ‘heresy’ early on) and when first published in the early ‘60s the novel shook up complacent (& mostly American) ideas about ‘Judeo-Christian culture’ and its seemingly inevitable continuity.

Vidal taught me many things when I read this book, but two stand out:

1:  We should never take on trust any aspect of our own time’s shorthand idea of historical inevitability when we make fiction about the past.  The past is not monolithic – the lives we plunge into are as contested and exposed as our own.

2: There is much fun to be had with the fictionalisation of lost writings – whether real or imagined – from the past, particularly those with the ‘if only it had survived’ factor.

Much later, when writing The Judas Case, I realised that there was a third thing that I’d learned from  Julian.  Vidal prefaced the book with a list of some of the sources, classical and recent, that he’d consulted when researching.   I’ve heard it suggested that this represented a (uncharacteristic) loss of nerve on his part – that he felt the need to justify, outside the fiction, what could be seen as his revisionist portrayal of the history of Christianity.  Personally, I found his bibliography a great stepping-off point for further exploration.

But this leads to a serious question for the historical novelist – should you ever reveal your sources?  Answers, suggestions and arguments very welcome in the comments below.

I should add that with The Judas Case I have deliberately decided not to provide a bibliography.

By Nicholas Graham at April 04, 2022
Email ThisBlogThis!Share to TwitterShare to FacebookShare to Pinterest

Delighted to announce that the paperback edition of The Judas Case is now available for pre-order ahead of publication on 28 August! Reserve... 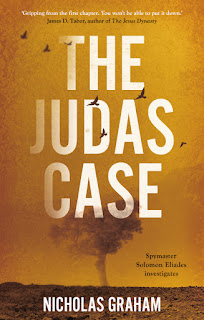